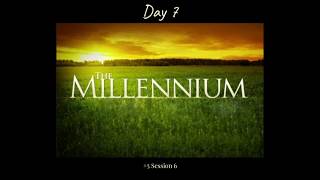 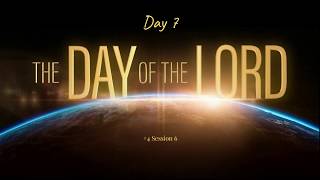 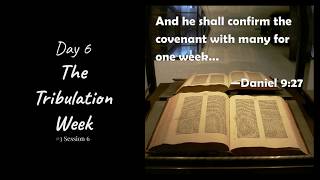 Previously, we looked at the last days which, seen from the perspective of the Seven Days of Creation, refer to the past 2,000 years since the time of Christ and birth of the Church. We saw how Jesus warned us that there would be deception, war, famine, and natural calamities and plagues, but that these were only “the beginning of birth pains.”; how believers will be persecuted until the full number of those who are to die for their faith is in; and finally, how the fullness of the Gentiles, once reached, marks the end of the summer harvest, the Age of Grace or Church age, and the beginning of the 7-year Tribulation. There will be NO MORE Gentile harvest from this point on, as the Church experiences its greatest ever earthly rupture rather than a heavenly rapture. In such a time, we are called to patiently endure and remain faithful as we enter into this final stretch of history before Jesus returns.

As we turn now to the Tribulation Week itself, there are four key events or things to take note of:

First, the Antichrist will “confirm a covenant with many for one ‘seven’/week” as mentioned in Daniel’s prophecy. This will likely take place on the Feast of Trumpets - which is also the Jewish New Year - to mark the start of a New Year/new beginnings for Israel and the world, thus kicking off the Tribulation countdown and the start of the “Time of Jacob’s Trouble.” This covenant or treaty is likely a deceptive offer of world peace, as the Antichrist promises to put an end to the Israeli-Palestinian/Arab conflict and also the wider “clash of civilisations” between Christianity and Islam through his demonic kingdom. Israel will, for the first time since its rebirth in 1948, be “a land of unwalled villages ... a peaceful and unsuspecting people” as described by the prophet Ezekiel (Ezek 38:11). The Third Jewish Temple will also be built then, likely side-by-side with the Dome of the Rock/Al-Aqsa Mosque and perhaps even a Church as the Temple Mount becomes the prime example of world peace and inter-faith harmony.

In this new age of “peace” and “enlightened tolerance”, we will witness (ironically) an increasing intolerance of those who refuse to compromise their faith - something that is already happening today. There will arise widespread suppression of true believers by governments and even by their own churches as they buy into this deceptive argument. The path to world peace will be paved with the bodies of possibly millions of God’s faithful, their cries drowned by the shouts of those celebrating this new world order under the Antichrist and His False Prophet.

However, this false peace will not last. The Old Testament prophecies record at least two major wars involving Israel’s Arab neighbours and nations from as far north as Russia, as well as the destruction of Damascus. The deception, war, famine, natural disasters and persecution mentioned earlier will continue until the very end.

This brings us to the next key event - after 3½ years (that is, midway through the Tribulation Week on the Feast of Passover of the fourth year), the Antichrist will break this covenant to set up what is known as the “abomination of desolation” in the Temple. He will declare himself the Passover Lamb, defiling the Temple by making himself God and Christ. Aided by the False Prophet and ten leaders who will come into power then, the Antichrist will trample Jerusalem, blaspheming God and persecuting God’s people while deceiving the rest of the world and making them receive the mark of the beast (666 - see here for its meaning). He will also destroy his former ally, the apostate church, and go to war with various nations.

The remaining half of this 7-year period is known as the Great Tribulation. Jesus described how “Jerusalem will be trampled on by the Gentiles until the times of the Gentiles are fulfilled,” while John described in detail the key events and characters during this period. In particular, John spoke of the miraculous display of God’s power and judgment by the Two Witnesses - possibly Moses and Elijah, both of whom had performed such amazing acts in their lifetimes and who were with Jesus at His Transfiguration (Rev 11:1-12). There will be a spike in all the calamities unleashed by the first 5 Seals as well as in demonic activity, as Satan will have been thrown down to earth during this period and knows that his time is short.

Third, now those who believe that we can “speed up” the Second Coming of Christ by finishing the task of world evangelisation often quote Jesus’ words in Mt 24:14 that “this gospel of the kingdom will be preached in the whole world as a testimony to all nations, and then the end will come.” While we should certainly try our best to fulfil the Great Commission, when we realise that in verses 9-13 just prior to this Jesus was speaking of persecution, of many turning away from the faith and betraying and hating each other, of many false prophets appearing and deceiving many people, and of increasing wickedness, where the love of most will grow cold and one needs to fight to even stand firm in the faith just to be saved, let alone save others, it is clear that Jesus was not referring to a victorious Church winning over the world - in fact, it will be despite the Church. As John would later reveal in Rev 14:6-7, the Gospel would be preached by supernatural means, likely through the supernatural witnessing of the Two Witnesses as we will see afterwards. The purpose here is not world evangelization, to bring about salvation - for the fullness of Gentiles will have already come in by then. Rather, it is to announce that “the hour of his judgment has come,” for the wicked will remain unrepentant and defiant towards God even after being confronted with the Gospel.

Finally, the Great Tribulation climaxes with a series of cosmic signs and the outpouring of God’s wrath on the wicked with the breaking of the last 2 Seals and releasing of the 7 Trumpet and Bowl judgments described in Revelations. The Old Testament Prophets also spoke of great cosmic signs that would mark the Day of the Lord, while Jesus described how these signs would accompany His return. Now, given how similar the 7 Trumpets and Bowls judgments are to the miracles performed by the Two Witnesses, it is likely that these judgments are the means through which the Two Witnesses demonstrate the truth and power of the Gospel before a wicked and unrepentant world.

Only then will the end come with the Day of the Lord.