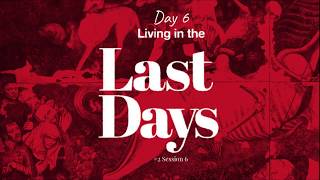 Shalom Aleichem and welcome to my bi-monthly blog!

Before we continue any further, I want us to consider the signs of the times found in our study of God’s Word so far. This is because we are called to understand them and not be like the hypocritical religious leaders in Jesus’ time who were not satisfied with those signs already given to them but demanded more. Ultimately, such individuals will never be convinced and will face the consequences of their unbelief.

We learnt earlier that we are reaching the end of the sixth millennium - AM 5978 (Aug 2019) in the calculation used here. If we go by the Jewish calendar, the year is 5779 but if we take into account the likelihood that there are 165 missing years in that calendar (unfortunately we don’t have time to get into this here), then this brings us to the Jewish year 5944 - which is close to our own calculation.

Lastly, in 2017, the Protestant Church celebrated 500 years since Luther’s proclamation. If Jesus first came about 530-odd years after Cyrus’ proclamation, going by that same time-frame, we could be looking at another 30-odd years before He returns. This fits in with our other indicators - all pointing to the next 20+ to 50+ years.

Now, some of you may object - did Jesus Himself not say that we will not know when He will return? That even He doesn’t know - only the Father knows - and that His coming will be like a thief in the night? I will address this in detail at the end of our entire study but at this point I just want to say that what we are doing here does not contradict what Jesus told us. We are not here to figure out exactly when Jesus is coming, to pinpoint the exact date of His return. But as the verses above suggest, we are expected to understand the signs of the times so that we know how near we are to His coming. Knowing how near is different from knowing the exact date, but it is also very different from saying that it could be now, in this generation, or a hundred generations from now, because that would make us wake up from our complacency.

So if we stop closing our minds and instead open our eyes, we will see that we are indeed the final generation. We are the ones Jesus spoke of when He said “Truly I tell you, this generation will certainly not pass away until all these things have happened” (Mt 24:34, Lk 21:32). No doubt many of us may pass away first before this happens, but the point here is that there will be those among us even now who will witness the events leading to Jesus’ return.

Going back to our other verse above, Jesus spoke of the sign of Jonah. In Mt 12:38-42, Jesus explained that this sign referred to His death and resurrection. But Jesus also mentioned how the men of Nineveh whom Jonah preached to repented, unlike the Jews of His day. Consequently, while the Ninevites were spared from God’s judgment which was supposed to come forty days later (Jon 3:4), for these unbelieving Jews, their end did come within their generation about forty years later with the Roman exile of 70 AD. Today, we are that generation to whom the sign of Jonah is once again given for a final time. We can either choose to repent and believe or continue ignoring the meaning of this and all the other signs I have listed here until it is too late.